Wine-making training and scientific-production base with a CIF grant

On December 12 the official opening of wine-making education and scientific-production base of Armenian National Agrarian University (ANAU) in the education-experimental branch of the university located at the Voskehat Community in Armavir region took place. Wine-making education and scientific-production base was founded by the World Bank’s co-financing in the frameworks of Competitive Innovation found (CIF). The history of establishment of wine-making education and scientific-production base started from December of 2015, when in the frameworks of CIF realization of the grant project "Development of Scientific Industrial Component of Winemaking Education" (DSICWE) launched. As the result of the grant project a full effective educational system of winemaking was created in the in the education-experimental branch of the university located at the Voskehat Community, as well as launching of exemplary area equipped with modern science-engineering equipment for experiments. At the opening ceremony of wine-making education and scientific-production base Acting Minister of Agriculture of RA G. Gevorgyan, Deputy Minister of Education and Science of RA H. Hovhannisyan, ANAU acting rector Vardan Urutyan, “Center for Education Programs” PIU director G. Hovhannisyan, PIU representatives and students were present. At the beginning of opening ceremony the ANAU acting rector Vardan Urutyan welcomed the audience. He spoke about the huge amount of work done, the investments, as well as the expected outcomes and goals of the project.
"Besides the opportunity to acquire practical skills, this scientific and production base, will also stimulate the production activities of the Agrarian University”,- noted V. Urutyan. The Acting Rector stated that the grant project was implemented thanks to its partners. “As a result of our joint work and cooperation, a research and production base has been established, which should ensure the link between education, science and industry”. Expressing gratitude, he handed souvenirs to the partners and wished a productive work to the newly established base. The Acting Minister of Agriculture of RA G. Gevorgyan highlited the opening of scientific and production base, stated that the base will play a significant role in registering new achievements in winemaking. “This will give a new impetus and will create a basis for healthy competition in winemaking”,-mentioned G. Gevorgyan. Acting Deputy Minister of RA Ministry of Education and Science (MES) H. Hovhannisyan wishing productive and fruitful operation to the newly established base, expressed gratitude to the World Bank, the Center for Education Projects and the managerial staff of the University for their great collaborative work. H Hovhannisyan noted that it is very important to implement such programs in Armenia. “Implementation of such an innovative project in the higher educational institutions indicates the continuous cooperation between "Center for Education Projects" PIU and universities". Talking about the effectiveness of grant projects, the Deputy Minister emphasized; that in grant projects implemented with the support of the “Center for Educational Projects” two important components are highlighted: the continuity and innovation of the project, which contributes to the development of scientific and innovative activities in the higher educational institutions and commercialization of the results of scientific activity. “Such kinds of centers created with the support of «Center for Education Projects» PIU enable us to decentralize our education by moving the student from the classroom to the practical field”. Referring to the the activity of the newly established base H. Hovhannisyan mentioned: “I hope that next year, during the wine festival in the ‘winy’ part of the capital, that is to say at Saryan street, Yerevan residents and guests of the capital will also enjoy the wine produced by Agrarian University. After the opening ceremony the guests got acquainted with the newly opened educational-production base. The attendees started their visit from the production area of the scientific and production base; grape fermentation containers were located in production areas, the barrels for raw materials and wine storage were in the proper place. During the visit the ANAU acting rector emphasized the importance of the winemaking professional audience, which will give an opportunity to the winemaking students gain practical skills about wine production, bottling, storage and supply and will promote the development and introduction of new technologies in the wine industry. The visit ended with wine tasting. Thus, as a result of the effective implementation of the ANAU grant project, an education and production area equipped with modern technology has been created, which can conduct wine, education, consulting and production exemplary services in the region. 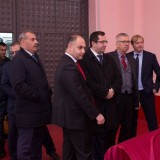 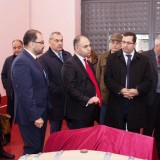 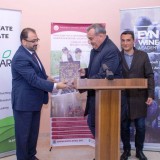 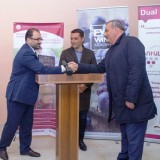 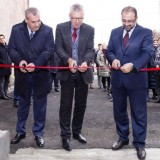