Within the framework of the EIP AF grant project, the "Equipping General Education Schools" sub-component started the needs assessment process in the Armavir Region of RA on July 29. In the context of the process, the representatives of the CEP PIU met with the governor of Armavir region, Edward Hovhannisyan. Mher Melik-Bakhshyan, the head of the sub-component "Equipping General Education  Schools" spoke about the planned grant projects in the region, which will be implemented with the co-financing of the World Bank within the frameworks of the "Education Improvement Project Additional financing" loan project, specifically referring to the provision of science and engineering laboratory equipment, furniture and materials for public schools in the region, as well as the implementation of micro-projects planned in the region, as a result of which preschools will be established in a number of communities in the region. Welcoming the guests, the governor assured that he will support the programs to the maximum and is ready to make every possible effort for the implementation of the grant projects. He noted that in the case of purposeful and cooperative work, the result will be visible in the near future. Referring to the possible problems during the creation of laboratories and preschools, Edward Hovhannisyan emphasized the need to make the connection between the Regional Administration and the Center for Educational Programs closer and more efficient, so that the implementation of the projects would be faster, smoother and more efficient. After the end of the meeting, the representatives of the CEP PIU started their working visits to the educational institutions of the city of Armavir of RA Armavir region. 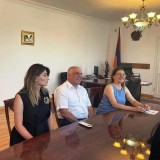 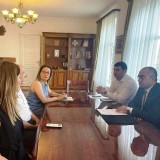 25.10.2022 A two-day workshop was held in CEP PIU office within the framework of CIF cycle of EIP AF On October 20-21 a two-day workshop with the participation of the representatives from potential beneficiaryinstitutions (both state and private) as well as with the participation of CEP PIU program, financial and procurement staff was held inthe CEP PIU office. The main purpose of the organized meeting was to thoroughly discuss all issues related to overallproject implementation including the procedures related to filling out grant proposals, the sizes of the provided grants, the... 20.10.2022 The World Bank Education team met with CEP PIU staff and discussed the ongoing activities in the frames of the "Education Improvement Project Additional Financing" loan program During October 05-11, 2022 the World Bank (WB) Education team, visited Armenia to meet with RA Authorities and discuss the development priorities of the sector and to find out the possible scope and nature of further cooperation between the RA government and the World Bank.During the visit on October 7 the World Bank delegation met with the “Center for Education Projects” PIU staff.The mission was led by Ms. Renata Freitas Lemos(Senior Economist, Task TeamLeader)and also... 11.10.2022 Working Visit to the Educational Institutions of Gegharqunik Region of RA Within the frameworks of the "Education Improvement Project " with Additional Financing (EIP AF) the sub-component ''Promoting School Readiness and Equal Opportunities at the Start of General Education '' continues its activities. In this context the establishment of new pre-schools will launch this year in the communities of RA five regions. On October 6 and 7 the representatives of the sub-component ''Promoting School Readiness and Equal...