Tereza Sahradyan is a fifth-year student at Yerevan State Medical University who wants to major in surgery. She takes every opportunity to gain hands-on experience before becoming a professional practicing doctor. That is why the Practical Skills Simulation Training Center, housed at the university, is the perfect training environment for her.
Opened just three years ago, the Center has 16 rooms that are designed to mirror real hospital conditions. Here, students can practice different medical scenarios on electronically controlled mannequins and models that simulate physiological symptoms, and respond to the students’ actions.

“The practical courses offered by the Center are extremely useful,” says Tereza. “When I eventually get to work a shift in the surgery unit of a hospital, I will almost certainly know what to do.”
In the Center, students study patients’ records, handle diverse medical cases that replicate actual healthcare settings, and propose treatment options. When an action is taken correctly, the simulators respond and the screen shows that the heart has regained its ability to function properly.
“Here, they can make a mistake a dozen times and that is fine, acceptable, but in real life they won’t have this option,” says Suren Hovhannisyan, DMedSc, Head of the Center.
Lilit Zurnajyan is also in her fifth year and, like many of her peers, she looks forward to attending the classes at the Center because she can put her knowledge to practice. “I am still in a limbo,” jokes Lilit, “but these lessons will finally help me to identify a profession for life.”
The Center has been set-up to function like a resuscitation unit, an intensive care unit, an obstetrics and gynecology unit, a surgery unit, and a military medical corps 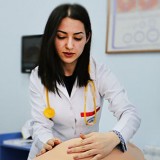 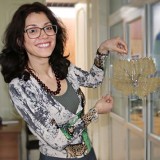