Our goal is to create new jobs by stimulating capital expenditures Prime Minister Nikol Pashinyan held consultations on capital expenditures to be implemented in education, energy and road construction, as well as on completing the long-standing credit-funded projects.The Prime Minister first addressed the situation with the spread of coronavirus, and then the government’s steps to implement capital programs. “The coronavirus epidemic has led to economic and social complications worldwide, and the biggest challenge for Governments is to make the necessary decisions and implement appropriate policies.In fact, the work of the government has turned into the activities of the anti-crisis operational headquarters, but on the whole it is important to fix our common perception of overcoming socio-economic difficulties.Today we are focusing on the solution - from the moment when its solution becomes possible in the epidemic plan - of the next problem: job creation. We know that very serious changes will occur in the labor market due to the effects of coronavirus, and the government should help create new jobs.

What is the instrument through which the government can promote this process - job creation? In our opinion, it is first of all an efficient realization of capital expenditures and their possible increase. And today, in fact, the government's work is divided into two main parts. The first part, of course, is the activities of the Commandant's Office, which is tasked with tasks that are, in fact, sometimes contradictory: the first task is to prevent or control the further spread of infection, and the second task is to create conditions for more and more institutions and enterprises to be able to work and more space for economic activity, which, of course, should not lead to a new outbreak of the epidemic. We all understand that this is a difficult task. This is also why the government declared a state of emergency and made some changes to the legal regime of the state of emergency in order to make the solution of this problem more realistic,” the Prime Minister said.

According to Head of the Government, the second direction of the executive power is the formulation, development and implementation of measures of social and economic support, stimulation of capital expenditures. The Prime Minister reminded that the ministers, heads of departments are responsible for promoting capital expenditures in specific directions: “Under-fulfilling capital expenditures has been a common practice in Armenia for many years, but in the new realities, I mean amid the epidemic, the effective implementation of capital expenditures, the increase of their volume and coverage becomes extremely important as we believe that each incomplete capital expenditure affects the wellbeing of specific people and families. Therefore, our task in the economic sphere is to create new jobs by fostering capital expenditure, which will lead to the creation of a new system, new jobs and enterprises. This should be a priority for the Government as it is to overcome the economic crisis. We are working on a daily basis. These are the main areas of our work, and we must do everything possible to make these two areas effective, since they are interconnected. The effectiveness of one, of course, will increase the efficiency of the other,” the Premier said.

Stressing the need to discuss the pace of credit-funded projects, Nikol Pashinyan noted that currently there are USD 1.3 billion-worth borrowed funds to be invested in the Republic of Armenia. The Premier noted that the Government should do its best to make those expenses effective not only in economic, but also in social terms, so that new jobs could be generated in the country.

“We have set ourselves the task of optimizing the portfolio of expenditures. Through proper planning we can attract new funds and implement new programs that will help expand our economic potential and create new jobs,” the Prime Minister underscored.

Then the responsible persons in the spheres touched upon the implementation of the above-mentioned programs. In particular, it was informed that 75-80% of expenses have already been implemented since last year within the Education Improvement credit program, repair and replenishment of a number of secondary schools with new inventory is carried out within the program. Work is being done under the same program to set up physics, chemistry and biology labs at high schools and higher education institutions.

Then the program of building 22 modular schools in different communities, the work on introducing a distance learning tool in regional educational institutions was touched upon. The responsible government officials reported progress in implementing capital projects in other areas, including the design of sports halls and other infrastructure projects.

Prime Minister Pashinyan told those responsible to announce construction tenders under the above programs as soon as possible and to ensure their timely implementation. 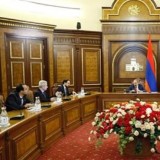 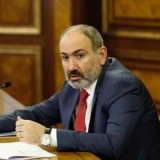